A. Werner Silversmiths, the last remaining original business owner on Water Street has enlisted the Barry Company’s services in selling its building at 1241 N. Water St. in Milwaukee. Nick Zurich of the Barry Company will represent A. Werner. The listing features 3,520 sq. ft. of retail space and a parking lot with four spaces. The asking price is $990,000.

“Location is everything with this listing,” says Zurich. “It’s right in the middle of the entertainment district and a block away from the Fiserv Forum. Businesses on this block see a lot of activity.”

A. Werner has occupied Water Street since Austrian immigrant Adolf Werner founded the company back in 1888. His son, Leo started running the business in 1940 until his death in 1954. Douglas Wied, Leo’s apprentice, took over after Leo’s death and later passed the business to his sons. Throughout the years, A. Werner has worked on countless family heirlooms as they were passed down from generation to generation. Jewelers and department stores that used to occupy the 3rd Ward area were another steady stream of revenue. “Milwaukee has changed a lot,” comments Mike Wied, current silversmith and co-owner with his brother, Dennis. “This area used to be nothing but highway overpass. We just stayed here and watched Water Street grow around us.” Mike is looking forward to retiring and moving up north. “The market has been steadily slowing down he says, “It takes a long time to train someone to take over a practice like silver work, so we decided it was time to sell.” 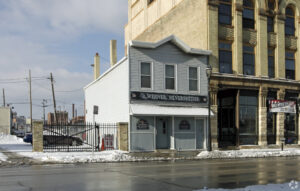